One of the topics that is always being addressed in various ways is the safest way to clear corners. Let's face it- it's inherently dangerous when there is a potential threat on the other side of a blind corner that you can't see. It's even more dangerous if the threat is aware of your presence and you are not aware of the threat's presence. Furthermore, there's a lot more aspects of inherent danger when that threat is armed or potentially armed. So no we're stuck trying to figure out how to navigate a corner while not knowing if a potentially armed threat exists while deciphering if said potential threat is already aware of our presence and is potentially preparing to ambush. Sound easy? It's not. In Call of Duty you get to start over if your character gets impacted. In real life, your family and friends bury you.

In short, the seriousness of this often under-practiced could not be more paramount. So let's look at what goes wrong with some people's approach, and how we can avoid those same pitfalls.

The first potential issue presents itself with the use of cover or concealment. (By the way, understanding the difference between the two is absolutely vital in this situation. Concrete might stop a bullet, but sheetrock doesn't.) Too many people crowd their cover. Some people even lean against their cover. The only reason that you would ever need to be that close to your cover is in the event that there are multiple attackers or if you have been flanked (this includes high-ground) and the incoming fire is from a different angle. However, as Hollywood has taught us to do, many people will stay incredibly close to their cover and will expose too much of their body or require too dramatic of a (slow) movement in order to send shots down range. Furthermore, by crowding the cover as they attempt to clear it, they create too dramatic of an angle to have to clear in a safe and controlled manner. In other words, they create a "best case scenario" of taking too much time or exposing too much of their body, and a more realistic scenario of accomplishing both. In other words, they have drastically reduced their chances of survival. See below for visual representation of why we should NOT crowd our cover.

The next topic that we'd like to discuss is straight lines. Humans see in straight lines, and bullets fly in straight lines. Bullets travel in straight lines very quickly- so we need to remember that DISTANCE IS OUR FRIEND in a CQB situation. Sure, there are times where we need to close distance, but as a general rule of thumb- DISTANCE IS GOOD! Utilizing distance correctly often times goes hand-in-hand with not crowding your cover. For instance, in a scenario where there is no real limit to a retreating distance, we would like to use ample distance between us and maintain a good distance relationship where we can use the cover to our advantage while mitigating our risk of exposure. See below representation:

Other times, this option is slightly limited due to a lack of space in the retreat distance. This is true in many indoor scenarios where you may be approaching the threat area from a hallway. No matter if you are going to enter to the left or to the right, there is a limited amount of space. Though you might not can get all the space you'd like to have, you should still utilize as much of it as possible. See the below illustration. 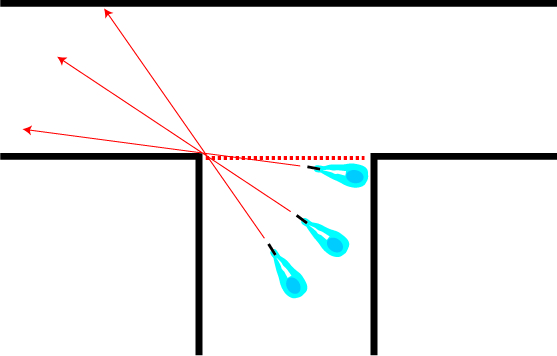